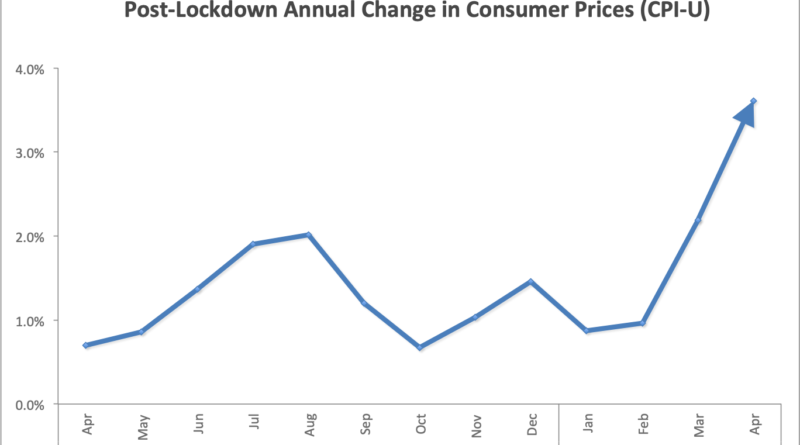 Listen to the news lately and you can’t miss the chatter about higher inflation. “Continuing supply chain disruptions, low inventories, and increasing labor costs have contributed to upward pricing pressures in recent weeks,” said the Federal Reserve Bank of San Francisco last week. Indeed consumer prices for the Los Angeles-Long Beach were up 3.6% in April over a year earlier, according to the Bureau of Labor Statistics. When the fed releases the May-to-May figures next month we will all know how large a rent increase Beverly Hills tenants will pay this year.

How Does Inflation Affect My Rent Increase?

Each year the rent stabilization division establishes the coming year’s maximum allowed annual rent increase for Chapter 6 tenants. The percentage is pegged to the percentage change in consumer prices (CPI) for the Los Angeles-Long Beach-Anaheim region.

CPI is measured by sampling a variety of goods and services available to consumers in our area each month. The Bureau of Labor Statistics then calculates the overall change in prices each month. Once the Bureau releases the May price data each June the City of Beverly Hills calculates the annual change from May-to-May and uses that percentage to set the maximum rent increase that landlords are allowed to demand.

In past years that allowed maximum annual rent increase has ranged from a minimum of 3% (the floor established by ordinance in Beverly Hills) to the percentage change when it is greater than 3%. Because consumer prices are a function of inflation, and because the allowed rent increase varies with consumer prices, rising inflation is a concern for tenants — and especially tenants on fixed-income or of modest means.

Let’s dig into the details. The rent stabilization ordinance’s subsection 4–6–3(B) pegs the rent increase to the change in consumer prices for Chapter 6 tenants:

Such increases shall not exceed the greater of: 1) three percent (3%) of the rental rate then in effect, or 2) the percentage equal to the percentage increase, if any, of the Consumer Price Index for the Los Angeles/Riverside/Orange County Area, as published by the United States Department of Labor, Bureau of Labor Statistics between May 1 of the then current year and May 1 of the immediately preceding year.

What that means is that the maximum allowed percentage rent increase tracks inflation upward, but when inflation is low, as it has been for much of the past decade, landlords can still demand 3% from Chapter 6 tenants.

For Chapter 5 tenants it is a different story. The allowed annual rent increase is calculated monthly according to a complex formula established in the 1970s and it varies up and down with consumer prices — even to a zero percentage increase in deflationary periods when prices don’t rise. However only about 5% of Beverly Hills tenants benefit from the Chapter 5 formula.

One last thing: there has been no allowed rent increase during the period of the local emergency. But once the local emergency ends, then landlords will be able to immediately raise the rent and to the maximum allowed. That is the rate that will be established by the city later in June after new price data is published by the Bureau of Labor Statistics.

The Outlook Ahead: Higher Prices!

This chart generated from Bureau of Labor Statistics data shows the depressive effect on consumer prices during the pandemic and the quick rebound as the economy reopened.

Will prices continue to rise? Last week a UCLA Anderson quarterly forecast saw “moderately higher” inflation through 2021 as the supply of goods works to catche up to pent-up consumer demand. The Federal Reserve Bank of San Francisco agrees. “With burgeoning demand for food services, prices for many agricultural products have also risen, which translated into higher prices at grocers and some restaurants,” said the bank’s recent update on economic conditions. “Additionally, prices for airline tickets, rental cars, and lodging have started to normalize from previous lows.”

That suggests the May-to-May change in CPI will continue to rise higher than 3.6%. As that percentage rises so will the percentage rent increase that can be demanded by Beverly Hills landlords.

The good news it is that renting households who participate in the labor market could benefit due to rising wages and declining unemployment. Particularly workers in information, business and professional services jobs who can expect to see wage growth in those sectors of more than 4% this coming year, according to the UCLA forecast. However renting households on a fixed-income, or not in the labor market, won’t benefit at all.

We don’t have contemporaneous data on the Beverly Hills rental housing market. However a UCLA/Anderson forecast estimates that Los Angeles rents have decreased by 7% in the Los Angeles area compared to a year prior. “Some [of that decline] is due to an exodus of households that were contemplating a move to the suburbs to welcome children in a few years,” says the forecast.

Indeed the pandemic appears to have resulted in a higher vacancy rate. But are all renting households affected equally?

We may be seeing a segmenting rental housing market where the luxury rental market appears robust and the mid-tier market remains tight. For example, rental housing developers appear confident, according to the UCLA forecast, and the relatively tight supply of available single-family housing serves to keep relatively affluent households renting. When affluent households rent housing it puts pressure on middle-class households down the ladder that must compete by paying higher rents.

However we could see lower rents in class C rental properties (the older and less-well maintained properties that make up a substantial proportion apartment buildings in Beverly Hills). Households hard-hit by the pandemic could be particularly price-sensitive now and asking rents should reflect that. Those households may be reluctant to spend an even greater share of declining income on housing.

Or they may make other plans. “This recession has had a major impact on low-wage workers,” said the UCLA forecast. “Less affluent households typically have less savings and at least some of these households are likely economizing on housing by doubling up or moving further afield.” That may support a higher vacancy rate in downmarket properties and consequently keep rents from rising too sharply.

The forecast anticipates that the relatively lower occupancy rates overall will continue through 2023 and keep downward pressure on rents. Will Beverly Hills landlords beat the forecast?