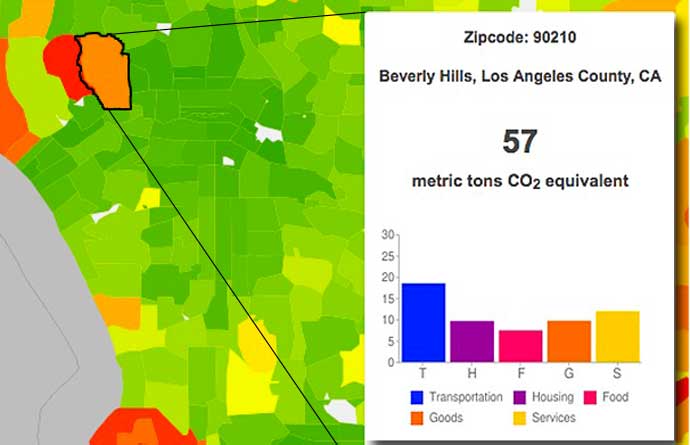 The coronavirus stay-at-home order has upended daily living for millions in the Southland. Beyond the implications for public health and the economy, hitting the pause button has put in relief the toll that our collective lifestyle choices take on the environment. But that’s so abstract, isn’t it? Two academics looked in greater detail at those choices by zip code and used that data to generate a ‘carbon footprint’ map for the United States. How do we in Beverly Hills compare?

In a recent study, authors Christopher Jones and Daniel Kammen (of UC Berkeley) computed the carbon footprint of households across the United States by modeling household consumption of food, transportation, housing preferences, services and many other activities, and then estimating the volume of greenhouse gas emissions that results from that consumption.

Beverly Hills falls near the national median when it comes to our carbon footprint: households across the country average almost 50 tons of greenhouse gas (GHG) emissions each year and Beverly hills households generate an estimated 44 tons of GHG annually. We also fall near the national median for urbanized areas too. (However worth noting that the carbon footprint of the average American household is about twice as large as that of our European Union friends who enjoy a similar standard of living.)

The contribution of their study, published in a paper titled ‘Spatial Distribution of U.S. Household Carbon Footprints Reveals Suburbanization Undermines Greenhouse Gas Benefits of Urban Population Density,’ is that greenhouse gas emissions varies quite widely across small geographies. They computed household data by zip code, which offers a much finer-grained picture of consumption — and environmental impact — that do most studies. Among the 37 categories of consumption they tallied were household income, housing preference, mode of transportation and much more.

The authors then mapped their carbon footprint estimates for each zip code across the county to produce an interactive map that not only shows the top-line GHG estimate but also how the consumption that drives those emissions breaks out across five key categories. The map is a lot of fun to browse. It is surprising how much variation there can be between neighboring zip codes!

The disparity between neighboring zip codes is clear when we compare to neighborhood just across Wilshire Boulevard from each other. Our neighbors in the 90210 zip code north of Wilshire Boulevard generate an estimated 57 tons of greenhouse gases annually per household.

But neighbors in the 90212 zip code south of Wilshire generate much smaller carbon footprint — just 63% of the GHG emissions — compared to our neighbors up north. Households in 90212 fall 25% below the average American household’s estimated GHG emissions too.

Our neighbors to the east in the 90211 zip code slightly more GHG emissions (+12%) compared to 90212 but that is still lower than the carbon footprint of the average American household, and it is nearly one-third smaller than the 90210 zip code.

Noticeable from the categories displayed on the interactive map is the production of GHG emissions by major category. The contribution of food consumption to the carbon footprint is more or less constant across these three zip codes; instead it is the transportation and services categories that are driving the differences. In the 90210 zip code, for example, transportation and services contribute relatively more to GHG emissions than occurs in either the 90212 or 90211 zip code. But so do emissions associated with housing and goods. That likely reflects the larger average dwelling size and associated patterns of consumption.

Why is the average household in the 90212 zip code driving relatively less GHG emissions? Dwelling unit size and household income.

Multifamily living is associated with a smaller carbon footprint because it is relatively high density; there are more people packed into a smaller area. Dwelling units are smaller and, given the predominantly older housing stock in the 90212 zip code, they are less likely to be air-conditioned. Both heating and cooling is less energy-intensive. Even the single-family homes in the zip code are relatively small — about 1500 square feet on average.

But there is another indicator that is associated with relatively lower emissions of GHG: reduced consumption associated with lower household income. The 90212 zip code is simply not as economically-advantaged as our neighbors north of Wilshire Boulevard. Greater wealth means more disposable income. That means more goods and services and more travel too. It all adds up!

How Does Beverly Hills Compare to the Westside?

Here the difference seems more pronounced on the north-south axis compared to the east-west axis. That makes sense when we think about consumption: in the Los Angeles area wealth rises with elevation!

The 90212 and 90211 zip codes fall largely in line with surrounding areas of Los Angeles and West Hollywood. All have a relatively high population density (average 11,000 people per square mile) and about average household income for the Westside (~$75,000). These zip codes include a higher proportion of multifamily dwellings (about 70% in West Hollywood) and we see that from the relatively lower contribution to GHG emissions in the housing category. These are walkable communities, too, and so reliance on auto transportation for local trips will be less.

Greenhouse gas emissions related to transportation is where the difference really emerges as data for the 90210 and 90077 zip codes shows how much it contributes to the carbon footprint. Housing and services are also big drivers: larger homes, greater rates of consumption and reliance on auto transportation all add up to a much larger carbon footprint. The study’s granular analysis at the level of the the zip code really suggests the extent to which our choices at the household level can affect something as abstract as global warming.

Authors Christopher Jones and Daniel Kammen are careful to point out that their study does not measure actual gas emissions but instead estimates consumption across a variety of inputs at the very local level. Their objective is to develop a ’household carbon profile’ for each zip code to understand the “primary drivers of household carbon footprints” at the local scale as a first step toward a ‘tailored climate action plan’ by locality.

This study could encourage our city council to think more concretely, and creatively, about how to reduce our carbon footprint. The city has made some progress by incorporating green building standards into our municipal code and adopting new regulations (and stiff fines) during the drought. But we’ve seen those drought regulations lifted. Dwelling size is on the increase in every Beverly Hills zip code and the city still does not encourage recycling.

City of Beverly Hills  has plans that should reduce GHG emissions The Sustainable City Plan (2008) speaks in broad terms about reducing consumption and the circulation element of the city’s General Plan (2010) recommends we replace car trips with other means. But these broad policy statements seem like ‘shelfware’ rather than any kind of plan for action.

We see from the carbon footprints at the local level how transportation affects GHG emissions. And if we need a concrete indication of the relationship between carbon footprint and environmental impact, we now have it: witness the substantial change in air quality as a result of the state’s stay-at-home order. It is as if we are living through the kind of study we could never undertake! Depress household consumption and see the corresponding effects! Cleaner air, less congestion, and fewer crashes and crash injuries.