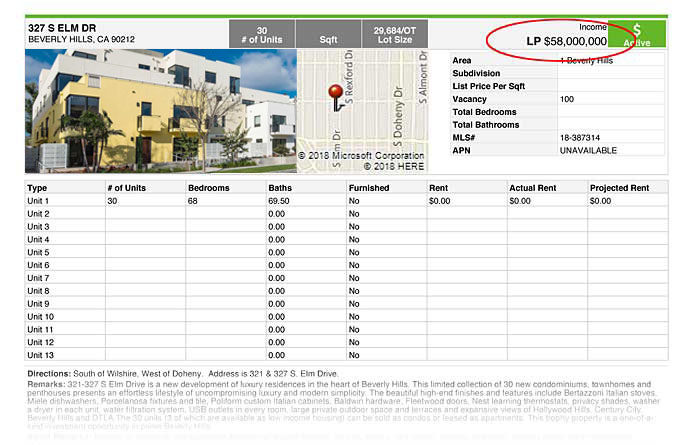 Moderate-income households take it on the chin in today’s tight rental housing market. Demand for rental apartments is rising as high housing costs push families to rent. Our region is attracting well-educated workers with higher salaries and they need housing. Yet Beverly Hills has not meaningfully increased the supply of apartments over decades. This is how these dynamics play out to our disadvantage in Beverly Hills.

Small and medium sized multifamily rental properties form the backbone of our affordable housing stock, yet we are losing this (rent-stabilized) housing and its relatively-affordable rents to the development of market-rate developments (especially condominiums). The new housing does not serve the city’s needs but instead addresses only a small strata of housing demand. We should be working to preserve (and expand) this housing stock not razing it for condos.

If you’ve walked the 300 South block you’ll remember the condominium development that sprawls across multiple lots.The cold institutional character and generic modernist styling is representative much new architecture across our region. The hard polished surfaces and stainless steel appliances inside are standard-issue.

Indeed this is a marketer’s dream! “Luxury residences in the heart of Beverly Hills set amidst a charming tree-lined landscape,” says the (rebranded) development’s Pacific Star website.

Luxury residences may be attractive to buyers, but razing properties that housed 23 families was a nightmare back in 2012. Most were sent packing with 60-day notices and without a relocation fee. Here’s one testimonial posted to a community news with the title, Beverly Hills Needs a Relocation Ordinance to Protect Tenants:

I am currently a Beverly Hills resident and have proudly been so for the past two years. I moved to the area from Thousand Oaks to be closer to my job and to give my son a great education…However, being a single parent and the sole provider for my son, it has been an uphill battle to be able to afford the rent in such a pricey neighborhood. We did it though, on time and in full every month. Then I came home from work one day and saw a notice on my door. The notice said we had 60 days to vacate the property and that they would be demolishing our building, plus four others in a row, to build a ginormous condo building. I had no extra money for this; we lived paycheck to paycheck as it was….
I ended up moving to a place nearby for $400 more a month. I had to sell my car for a lesser one and liquidate some of the items we owned to be able to afford it. But getting rid of my things wasn’t the saddest part of the experience. There were four other single parents living in my two-building complex and an elderly couple who had lived there 25 years.

When that householder was terminated she found few affordable alternatives in the city. But she could not afford to move far: her son was headed to high school. A few years later her subsequent landlord started pressuring tenants to leave in order to reposition the property. The 60-day notice was always a threat.

Also to South Elm were four modest apartment buildings and a single-family holdover from an earlier era. Each provided relatively affordable housing. Which brings us to the most outrageous aspect of this whole story: The condominiums at 309–325 South Elm have never been inhabited. Seven years after those families were sent packing there was still a gap in the block where good housing stock once stood.

The Problem: Lack of Affordable Housing

Early in 2017 our City Council cited the shortage of affordable rental housing as a threat to the public peace, health and safety. Council then enacted an urgency ordinance to 1) cap annual rent increases at the percentage change in consumer prices; and 2) to mandate a relocation fee for no-just-cause tenancy terminations. (Read more about those changes on our tenant resources page: Rent Stabilization Policy Explained.)

Changes to the rent stabilization ordinance could not help these displaced Elm families find replacement housing, though. What would help is having affordable housing options. Now, the 309–325 South Elm condominiums do include three ‘affordable’ units priced for eligible income-limited buyers. But they are of limited: there is only three and our city’s outmoded guidelines for such units prioritize police and teachers first.

Moreover, professions in the public sector in Beverly Hills pay too well for any to qualify under the state’s income limits. As for those displaced Elm households, could have any qualified for a reduced-cost mortgage? We don’t know because none were extended the opportunity.

Why did this development even include any affordable units? Because the state offers developers a ‘density bonus’ that provides an incentive in exchange for income-restricted units. (Read more about the bonuses available..) With 309-325 Elm the developer was able to build 20% additional floor area and a fourth story too. He could provide 10% more housing units for the bonus: just three additional condominiums. And the city agreed to it.

After the land was assembled, the tenants evicted, and approvals were won, the property went back on the market as an ‘outstanding development opportunity.’

Beverly Hills Could Have Asked for More!

When the developer came calling for approvals and entitlements, our city could have asked more of this developer during development plan review, which every multifamily project must undergo. The Planning Commission’s approval is discretionary. But it must make some findings:

Each of those findings (and more) must be satisfied in order to get the approval. That’s our opportunity to make relatively affordable housing a part of the project. Indeed the Municipal Code (§10–3–3410) accords the Planning Commission (and ultimately City Council) with considerable power:

In approving a development plan application, the reviewing authority may impose such conditions as it deems appropriate to protect the public health, safety and general welfare.

The 309–325 South Elm project underwent review early in 2008 when the economic crisis was upon us. At that time, residential stability was a key concern. Indeed the loss of rental housing should have raised some questions concerning housing affordability and availability, indeed the general welfare most broadly, and specifically whether luxury condominiums would actually advance the city’s goal of providing “housing alternatives.”

Officials could have sent the developer back to the drawing board for solutions. The commission could have denied the state density bonus on the grounds that the fourth story was “not strictly required” in order to provide affordable housing. That’s leverage! Or the city could have asked the developer to pay an ‘in-lieu’ fee to build income-restricted housing.

What about a partial replacement of the 23 relatively affordable units lost? A condition could have been added to require the developer to rehouse the more vulnerable displaced tenants too.

We missed that opportunity back in 2008. The architect/developer Hamid Gabbay has a long history with the city and perhaps that helped get the project approved. I wish I knew more: the video of that particular March 2018 meeting is the only Planning Commission Video that the city hasn’t posted – and that it can’t find!

Has the Inflection Point Arrived?

The tools for preserving and providing rental housing are getting a second look in Beverly Hills and beyond. Our officials today are more concerned about rental housing affordability than ever. Of course, Renters Alliance is here to remind them at every relevant commission and council meeting.

Indeed City Council is reaching for new tools so that we can make affordable housing the default — not the option — and to make sure that rental housing is a part of our overall development mix. That’s the good news.

Other news is mixed: two projects that were approved back in 2007 — 8600 and 9200 Wilshire — recently came back to the Planning Commission and City Council because the developers wanted to revise the development plan. Making that change requires approval by the city… and that means another bite at the ‘general welfare’ apple, right?

We hoped officials would encourage these developers to reconsider providing rental units instead of luxury condominiums (no luck). We also wanted a larger affordable housing component (no luck there either). Regardless, the discussion over those projects set the table for whatever will come next.

In the interim, Beverly Hills is exploring avenues such as making deed-restricting affordable condominiums be available for rent in perpetuity. That is complicated because association fees could push them out of the realm of affordability. (Association fees at 309-325 Elm run a thousand bucks a month on top of the mortgage.)

The test case for turning affordable condos into affordable rentals will come later in March with 8600 Wilshire. The project was approved to include two affordable units (in exchange for a density bonus) and the city is pressing the developer to make the two units available for rent. Stay tuned!

The city has also been discussing with the 309–325 developer a revised plan to make those three affordable condo units available for rent too. Those talks continue. Interestingly, the city had negotiated a purchase of those affordable units (as the closed-session agenda at right shows) but there was no agreement.

Less hopeful is the new mixed-use condominium project approved for the Friar’s Club site at 9908 South Santa Monica. This was a GREAT opportunity to demand rental units instead of condominiums. And the leverage was there because any mixed-use project needs a bespoke ‘overlay zone’ to make it happen (as did the other two projects). In exchange for that zone change the city could demand whatever it wanted. Rental units? Yes. Small rental units for young professionals? Of course. Small rental units with a significant (20%) set-aside for income-limited households? It could have happened!

The good news: the Friars Club discussion at City Council allowed the community to raise concerns about the need for affordable housing, and Council, prodded by to-be-Mayor John Mirisch, agreed to undertake an affordable housing ‘nexus’ study to determine how many (if any) affordable units it should be provided. We will know more in April.

Those rent-stabilized apartments were sacrificed for market-rate condominiums seven years ago, but the meantime 309–325 South Elm sits empty. It seems like the project is in yet another turnaround: it was put on the market last fall at $56M (more than $2M per luxury unit on average).

The fate of the 23 households evicted for this albatross is unfortunately unknown because the city kept no record. The developer bore no responsibility for resettling them. So let us hope in their new residence they enjoy an “effortless lifestyle of uncompromising luxury and modern simplicity” (as that the real estate listing promised future buyers).

We don’t know the fate of the evicted residents but we do have some information about the five structures that once stood here thanks to city ‘field surveys’ conducted a decade earlier. As a kind of epitaph we present them here starting with #309 (as indicated on the tract map).

Do you have any experience living in one of these properties on South Elm Drive? Please get in touch with Renters Alliance. We would like to post pictures that show them in their prime!

The city’s website keeps the affordable housing resources well-hidden. There is not even a menu link to it. Find it here. For more information about affordable rental units contact planner Timmi Tway at ttway@beverlyhills.org.