Last year Beverly Hills landlords saw their allowed annual rent increase drop from 10% to 3% and a city-imposed relocation fee for involuntarily-terminated households. They lost the battle for the rental unit registry and all landlords were compelled to get a business license when about one-in-ten had avoided it. If 2017 was a tough year then 2018 looks only worse should the Affordable Housing Act ballot initiative win approval from voters in November. 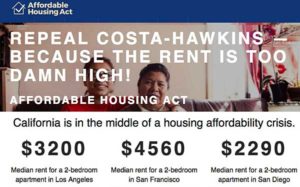 Because Sacramento failed to address the rental housing affordability crisis, the grassroots has stepped up with an initiative to repeal the state’s Costa Hawkins law – the legislature’s “gift to landlords,” as they say. The law will exclude an ever-larger proportion of renting households from local rent stabilization. If passed by voters, the Affordable Housing Act would take a GIANT step toward by allowing localities to craft rent stabilization policies to fit their circumstances. Read the fact sheet!

The Battle Against Rent Stabilization Was Always Local

City Council’s action last January to change our ordinance made Beverly Hills ground zero for an assault by some landlords and their front organization, the Apartment Association of Greater Los Angeles (“The Voice of Multi Family Housing Since 1917”). The AAGLA’s lobbyist was a regular presence at city meetings throughout last year.

Yet AAGLA got little traction with City Council. There were too many tenant complaints about rent hikes, habitability, evictions and landlord malfeasance. To gain greater traction, AAGLA hired local landlord Dan Yukelson to bump-up the ground game (meanehile the lobbyist decamped for a Sacramento gig).

He brands himself a ‘mom-and-pop’ owner with an Olympic Boulevard fourplex bought three years ago, but don’t be fooled: Yukelson is a finance professional. He knows a good investment when he sees one.  He is also a free-market ideologue. But the battle has gotten away from AAGLA.

Now it’s statewide through an initiative to repeal Costa Hawkins. The stakes are much higher! In a sign of how significant a threat the initiative poses to landlords, front groups like AAGLA have come out swinging; the firearms are blazing; they’re ready for the grudge match. But the initiative will resonate with voters because there is a housing crisis affecting millions of state residents.

The AAGLA lays down the battle lines in the May issue of AAGLA’s Apartment Age magazine. “Ladies and gentlemen, we are under attack!” exclaims executive director Yukelson in an editorial.

A voter initiative being proposed for this November’s ballot would, if passed, repeal the Costa-Hawkins Rental Housing Act of 1995, an important law that limits the scope of rent control ordinances. Supporters of the repeal measure include the resurrected ACORE [sic] group, an eviction defense law firm and a no-growth billionaire zealot (the “real money” behind the initiative) named Michael Weinstein.

Yukelson grouses about how repeal would take away cherished giveaways to landlords like these:

That last provision is especially important to landlords because it’s where they generate much of their cash flow.

The Battle Gets Personal

What appears to rankle Yukelson the most is that his organization has in the initiative sponsor a formidable opponent. Unlike tenants who are always on the back foot and easily intimidated by quick-evict attorneys, Michael Weinstein and his AIDS Healthcare Foundation (AHF) are heavy-hitters.

Weinstein has a track record of backing disruptive initiatives, and to put Costa Hawkins repeal on the ballot his Housing is a Human Right project collected more than a half-million signatures. Buying off the legislature is like taking candy from a baby compared to a grassroots juggernaut.

AAGLA is rankled to have such a worthy opponent. As Yukelson wrote in “The So-Called Affordable Housing Act” in Apartment Age Magazine (May 2018):

So, Who Is This Michael Weinstein? Michael Weinstein is the reported “polarizing and controversial” President of the A.I.D.S. Healthcare Foundation… It is a multi-hundred million, and by some accounts one billion, per year operation that for all intents and purposes runs a profitable, nationwide pharmacy operated as a non-profit organization.[2]

That’s how AHF can afford “plush, 21st floor offices near the corner of Sunset Boulevard and Vine,” he writes. Those “plush offices” echoes Yukelson’s prior claims that rent control proponents are freeloaders looking for a sweet deal on the backs of hard-working mom-and-pop owners (like him).

Yukelson soon dispenses with the frivolities: “Some might characterize the A.I.D.S. Healthcare Foundation similar to a drug cartel, but our research could neither confirm nor deny this characterization.” He offers no evidence to support that insinuation. But whatever!

Yukelson then pivots inelegantly from impugning Weinstein as a shady profiteer to casting him as a RED. As in communist. An ironic twist!

You see, he has been characterized as a Socialist stalwart that once taught Socialism at the college level. And, he has now surrounded himself with radicalized groups of tenants’ rights advocates that are staging ongoing protest marches, storming local city council meetings to profess the virtues of rent control and filling the media with false claims about rental rates, rent increases, property conditions and horrible tales of poor tenant treatment by property owners like you and me.

It is difficult to know who’s more of a ‘radical’ threat to landlords in Yukelson’s view: college professors, tenants-rights advocates or actual socialists? (Presumably all must be vanquished.) This is Yukelson wearing his right-wing ideology on his sleeve.

when he casts tenants as a threat to life, liberty and the pursuit of happiness. Or at least a threat to his cushy retirement. He told councilmembers back in September that owning residential rental real estate was the only way he could continue to live in Beverly Hills into his old age. Changes in the local rent law, he suggested, would put him and his wife out of house and home just as he’s approaching retirement.

Now I don’t think Yukelson saw any ‘radicalized’ tenant advocacy organizations at that meeting. There was no protest march and no meeting was stormed by radicals or anyone else. He

Yukelson and AAGLA are seeing ghosts of Lenin. His editorial muses on Weinstein’s darker, subversive motives like a latter-day ‘red scare.’

His far-left leaning philosophies led him to form, in 1974, the Lavender and Red Union, a Marxist organization that eventually merged with the Spartacist League. The Spartacist League is a Trotskyist political group and serves as the United States section of the International Communist League. This Spartacist League named themselves after the original Spartacus League of Weimar Republic in Germany, but the current League has no formal descent from it. The League self-identifies as a “revolutionary communist” organization.

Check out the not-so-subtle hammer-and-sickle illustration in AAGLA’s anti-initiative propaganda!

Yukelson then moves on to a litany of unsubstantiated allegations concerning fraud and kickback schemes. Even Weinstein’s purported support for Roman Polanski. No detail is too irrelevant to include. And wait for this best part: Yukelson says without providing support for the claim, “He has been accused of homophobia, even as a gay man.” All of it appears to come from one dubious source.

Our man at AAGLA closes with a battle cry and the inevitable fundraising pitch:

If Weinstein brings $20 Million to the table in support of the initiative, we need to bring 4-times that amount if we are ever going to beat him, and we will. You can help save your investments by helping us to help you… Now, more than ever, your full support is needed.

Never one to give hyperbole a pass, Yukelson closes his pitch, “The future of our apartment industry is at stake!” Hardly.