Beverly Hills residents take well-kept properties for granted. High-and-rising values generate resources for maintenance and, in turn, maintenance keeps property values up. But maintenance is not part of the business model for some owners of residential rental property. Instead their priority is cash flow. But scrimping on maintenance not only affects tenants; it also augurs an overall decline in the city’s rental housing stock. Let’s take an example!

Property maintenance is not simply a matter of aesthetics. It is also important to health, safety and the welfare of city residents. Beverly Hills Municipal Code (§5-7-4) requires property owners to keep up their properties:

This is what happens when an owner-operator lets his property deteriorate. When he lets peeling paint, dry-rot, dilapidated fixtures and dead landscaping predominate. This is a case study of deterioration of our housing stock.

The apartment house at the southeast corner of Charleville is an undistinguished example of postwar rental housing. The twelve compact units have provided relatively affordable housing for nearly seventy-five years. The foursquare facade is relieved by a lovely front patio. Dentile molding eases the transition to the generous eave. There is a lot to like about 200 South Reeves.

Perhaps the building is the image of the local man who erected it: H.M. Hodge, reported to have arrived in Los Angeles in 1899 and who checked into the swanky Nadeau Hotel on 1st and Spring streets (now long gone). Four decades later he’s building an apartment house in Beverly Hills for which the stated purpose on the building permit reads simply, “income.” 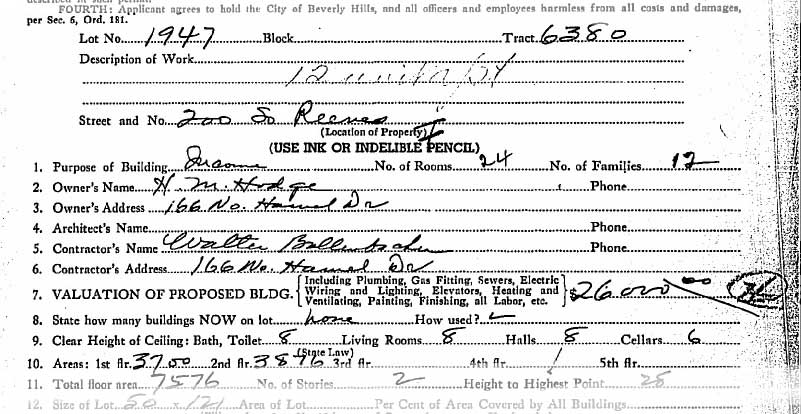 The building was a relative late-comer to the block. By 1941 the prior boom had come to a close and the war intervened. By the time this property went up the rest of the block was mostly built out. Unlike those other properties, though, time has not been kind to this property and uncaring ownership even less kind.

Walking by the property the telltale signs of of neglect were apparent: broken shutters, peeling paint, cracked cladding, dangling wires and, variously, overgrown and undernourished vegetation. This place has been a blight for a decade.

Imagine the surprise last April when Dr. Stephen Copen, the owner of 200 South Reeves, who is pictured above, appeared before City Council in early 2017 and actually counted himself among the city’s landlords who maintain their property!

Copen was there to denounce a reduced cap on the maximum annual rent increase imposed by City Council in January. He had a heartfelt story to share with City Council.

I hope when you come back to this you in April you will consider 3% is not a realistic number. The City Council members did not have had an opportunity to read our mortgage documents, know how much money we’ve borrowed, and know how our costs will go up when the interests rates go up. And a 3% increase may not reflect those expenses. Our other costs probably go up at at a rate more than 3%. We probably are reasonable people who maintain our buildings nicely and are responsive to our tenants’ complaints, and get things painted and repaired and plumbing done when they ask. Just as you’re responsive and listen to people here tonight, we try to be responsive to them, and that may take more than a 3% increase. — Stephen Copen, April 4, 2017

Perhaps Dr. Copen’s tenants will share their thoughts as to whether he is among those conscientious property owners who is “responsive to tenant complaints.” The evidence is very much to the contrary: the exterior 200 Reeves shows few signs of the kind of conscientious stewardship he trumpeted to City Council.

Copen is a longtime owner of five properties on Reeves alone. Many he inherited from his parents, he told City Council. If these buildings are indebted it is because he has borrowed against them using equity lines of credit.

But we need not speculate about Copen’s commitment to the community and to his tenants. We don’t need to see mortgage documents to know he’s draining the place of cash. Just behold the faded glory of Mr. Hodge’s onetime investment!